‘Booty of The Year’ Review
By Janice Griffin

“‘Honey Boy’ is played perfectly by Los Angeles actor Shane Woodson whose 20+ years in show business is demonstrated effortlessly in his role as a ring announcer and co-female wrestling promoter.”
Read more…

“Shane J. Woodson, as Mark, turned in the best performance of the show. His obvious distress at wearing a dress left the audience hoping to see more of his funny dilemma.”

“Loren Crawford and Shane J. Woodson are especially absorbing as Jackie and Jamie , a transient sister and brother who come off more than anything else like an odd variation of Lenny and George in “Of Mice and Men”.

“Some of the funniest moments occur during Olive and Florence’s double date with Manolo and Jesus, the Spanish brothers who live upstairs. Aptly played by Shane Woodson, Manolo is a slick lady-killer who ends up crying over broken relationships with Florence.”

“Shane Woodson plays Sarah’s real boyfriend, Chris, with a callow whininess that drives the audience to pull for Bob.”

“Creatively directed by Shane Woodson, who also plays Stanley Kowalski, the play is currently running at the Rudyard Kipling…” 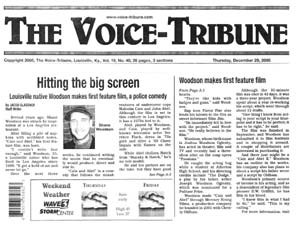 Review for ‘The Caretaker’ 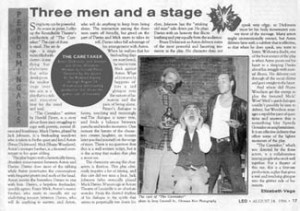 Review for ‘The Dodge’ 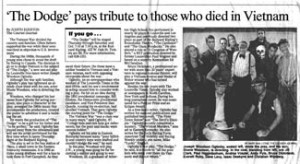